While the World Health Organization’s expert team is in Wuhan to investigate how the coronavirus jumped to humans from animals, China’s “Bat Woman” Shi Zhengli said in an article that mink could be a possible host of the origin of the novel coronavirus, and called on the world to investigate samples from more susceptible animals to determine when the virus moved to humans.

However, Chinese experts also stressed that Shi’s article did not fix the direct host of the virus on mink, and scientists in different fields need to deepen their genome sequence research on mink to verify the possibility.

Shi, a Chinese virologist from the Wuhan Institute of Virology dubbed as China’s “Bat Woman” due to her years of research and achievements in research with bats and viruses, and Zhou Peng, a scientist also from the institute, jointly published an article, titled “SARS-CoV-2 spillover events,” on Science Magazine recently, which said that after the COVID-19 outbreak in Wuhan, several groups reported SARS-related coronavirus in horseshoe bats in China and in pangolins smuggled from South Asian countries. But according to genome sequence comparison, none are directly the source of SARS-CoV-2, the agent of COVID-19.

In the meantime, COVID-19 infections in mink farms have been reported in eight countries, including the Netherlands, France, Italy and the US, according to the WHO.

There is limited evidence of animal-to-human transmission of SARS-CoV-2 except for mink, the study said.

Evolutionary analyses of viral genomes from bats and pangolins indicate that further adaption, either in animal hosts or in humans, occurred before the virus caused the COVID-19 pandemic, the study said. Therefore, an animal species that has a high population density, for example, mink, would be a possible host of the origin of SARS-CoV-2.

The current evidence also questioned the animal origin of the virus in the seafood market in Wuhan, as we have found the virus on the surface of imported food packages, and the coronavirus antibodies were found in human serum samples taken outside China before the COVID-19 outbreak was detected in Wuhan, which suggested that the virus had existed for some time before Wuhan discovered its first case, the study said.

Authors of the study called on retrospective investigations of pre-outbreak samples from mink and other susceptible animals as well as humans to identify the direct origin of the virus, and to determine when the virus moved to humans.

Shi’s study was published amid the WHO expert team’s investigation trip to Wuhan, which Chinese health experts believe would help worldwide experts explore more possibilities on the origin of the virus. 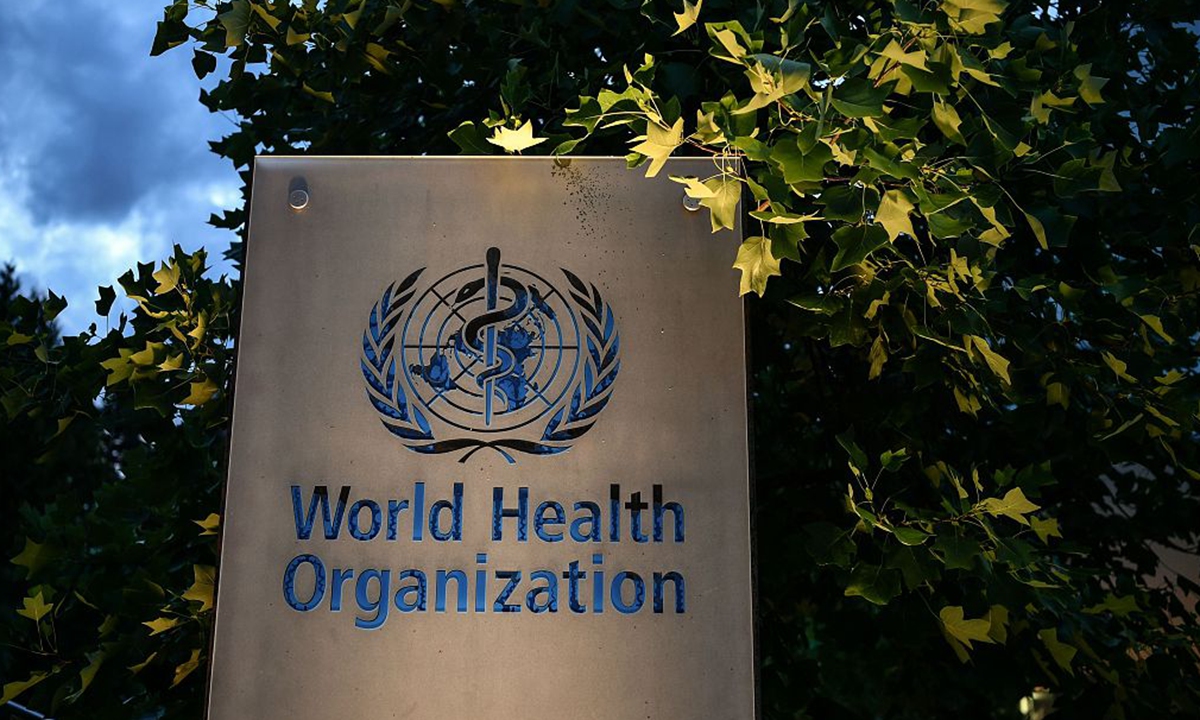 According to a Terms of References for the China part on the global study of virus origin sent to the Global Times by the WHO ahead of the visit, the international team will conduct studies to better understand how the virus might have started circulating in Wuhan, and these studies include in-depth reviews of hospital records for cases compatible with COVID-19 before December 2019, and a mapping of activities and items traded at the Huanan seafood market and potentially other relevant markets in late November and December 2019, including types of animals and stalls present at the Huanan market, according to the WHO.

Yang Zhanqiu, deputy director of the pathogen biology department at Wuhan University, told the Global Times on Friday that the WHO experts could work with Chinese counterparts to learn how and why the virus circulated in Wuhan, and their visit to Wuhan, including their methods and other experience, will set a fine example for more investigations in more countries.

Jin Dongyan, a biomedical professor at the University of Hong Kong, said that the WHO experts consisting of international scientists in various fields could provide China different experiences and thoughts on related studies.

But the world cannot pin their hopes of finding how the virus jumped from animals to humans and which species it came from solely on the ongoing WHO experts’ visit to China, which most likely will find no answer at all.

Too many scientific questions remain unanswered, such as how the virus triggered humans to develop the symptoms, and the infection chain between animals and humans. These answers cannot be found during Wuhan’s visit, Yang said.

The COVID-19 outbreak was first reported in Wuhan, but where an epidemic is first detected does not reflect where it started, according to the WHO.

Countries including the US, Italy and France have reported coronavirus evidence in environmental and human specimens before or around the time the virus was officially identified in China in December 2019.

Fabian Leendertz, who is part of the WHO expert team and biologist at Germany’s Robert Koch Institute, told the Global Times previously that the team would start where the first solid evidence was generated, and this is in Wuhan.

“From there we do the scientific work and follow the tracks wherever they take us… could be within China, could be outside China. We have to be open to all directions, this is what science is about and it is data based,” Leendertz said.

After overturning the possibility of bats, Shi’s article provided a new possibility, although more thorough research is needed, and helped broaden the range of potential animal hosts, experts said.

Yang said it’s possible we missed some animals in hunting the virus source because no scientists have dug into them.

“They may not just live in China but in Africa, the Americas or Europe. Is it possible that some animals in places such as the US where natural ecological environment is well-protected have some relation to the novel coronavirus as well?” Yang said.

So far, mutations of the virus have been found in the US, not Wuhan, and the WHO experts need to investigate in the US, Yang said.

The visit of WHO experts should also highlight sharing the Chinese experience on controlling the pandemic in a timely manner. This is a more realistic mission to complete, Yang said. 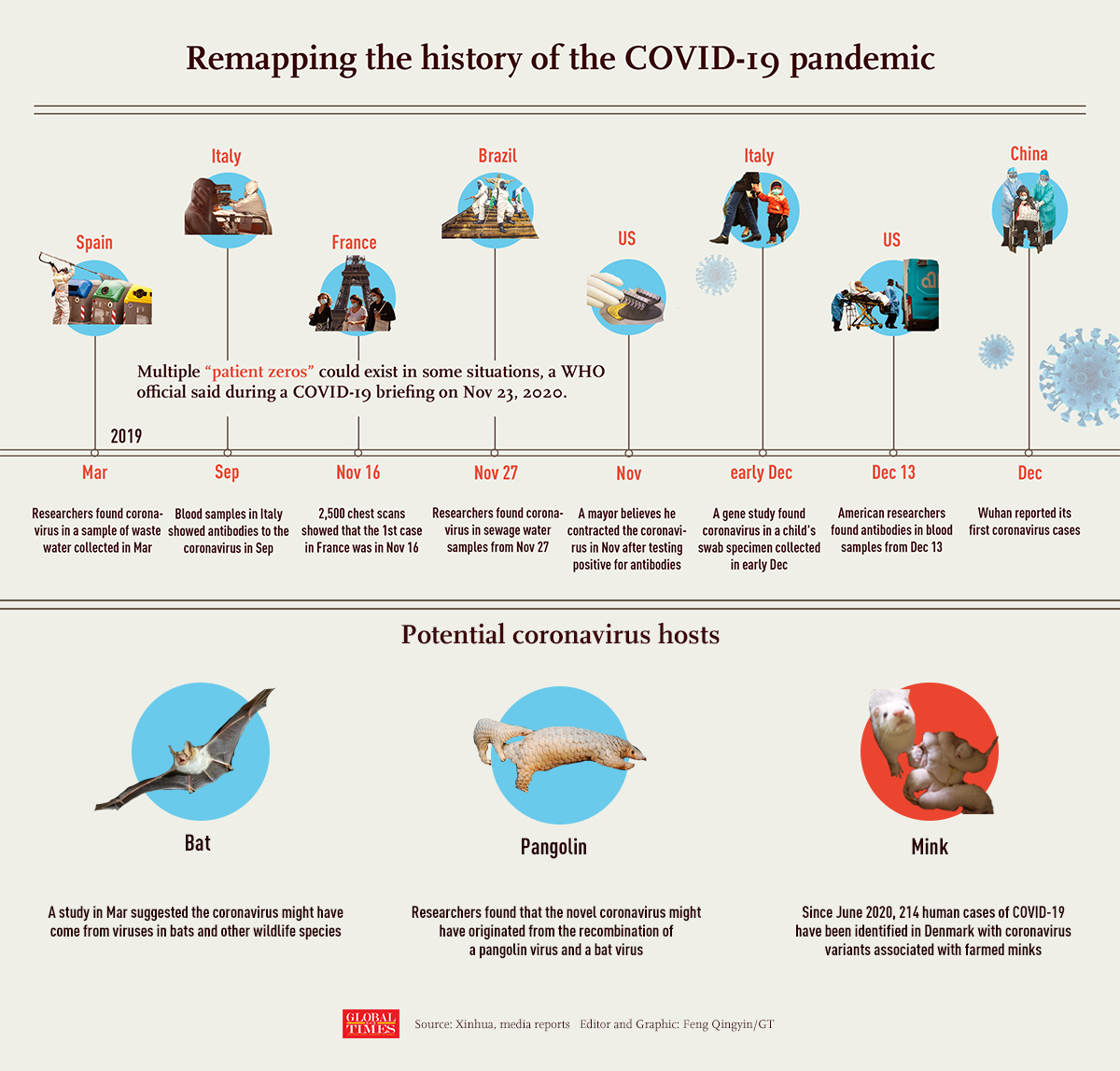 Remapping the history of the COVID-19 pandemic