In the heated evening hours of election night in 2017, Alexander Gauland issued an ominous promise — indeed a threat.

“We will hunt them,” the senior Alternative for Germany (AfD) politician said of his political opponents.

The night was September 24, 2017, when the AfD was catapulted onto the national stage, becoming Germany’s third-largest party and eventually the leading opposition party in Germany’s parliament, the Bundestag. Gauland would go on to co-chair the AfD’s parliamentary group.

Three years later, it’s clear that his pledge wasn’t meant as a metaphor.

Fast forward to November 2020, as right-wing activists filmed themselves in the Bundestag as they blocked and insulted lawmakers from various parties. They were part of major protests against planned national coronavirus restrictions being debated in the chamber. The men and women were properly registered — as guests of individual members of the AfD. They appeared to have been allowed in on purpose, to confront other politicians and then later to upload their videos to social media platforms.

The footage wasn’t pleasant. The stunt, with AfD fingerprints all over it, prompted outrage in Germany. After all, parliament is considered a protected space dedicated to the debate of political issues. 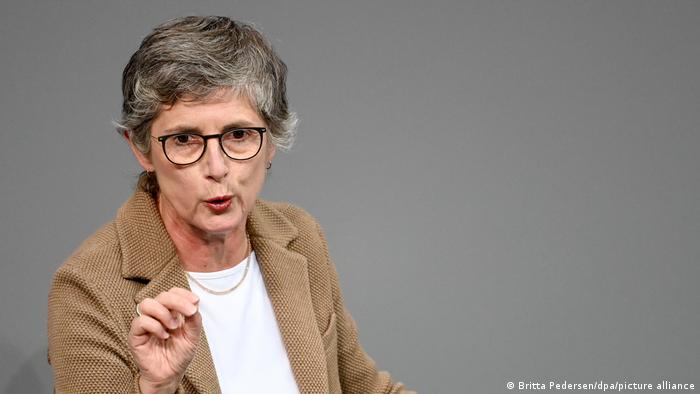 “The method and strategy is evident. On one hand they’re working to defame parliament but beyond that videos of such actions are made to be uploaded to YouTube and then shared with others,” Green Party politician Britta Hasselmann told DW after the incident.

Read more: What impact does hate speech have on climate activism?

The anti-racism Amadeu-Antonio Foundation, a Berlin-based non-governmental organization (NGO), is among the AfD’s sterner critics. It sees the action as part of an AfD media strategy to sow mistrust and undermine opponents. In a recent study, the organization wrote: “Right-wing activists have the goal of delegitimizing democracy, political opponents and democratic institutions.”

The study looked at the behavior of so-called “alternative right” groups including the AfD. These groups can reach audiences in the millions via YouTube, Facebook or Twitter, with the AfD’s YouTube channels among the most influential in the scene.

“Alternative-right actors seek to spread their ideology, which is not (yet) a majority opinion and which often exists outside the bounds of democratic norms,” the foundation wrote. “Therefore, they try to move the accepted boundaries of public discourse by way of repeated breaches of taboos. This is happening strategically, step-by-step, and continually.”

“Of course, I will not allow myself to be intimidated. But I do not want to acclimatize myself to hate and agitation. I don’t want to get used to the anti-feminism of the AfD either — to the laughter from their benches when women take to the speaker’s podium. I, along with many others, will never come to terms with that. The democratic parties will stand against it together,” Hasslemann vows.

The AfD’s media strategy bears a few of the hallmarks seen in outgoing US President Donald Trump’s approach to politics. In both, the truth is of no consequence, the main objective is to provoke and to grab attention. Activists close to the AfD also maintain contacts with the same alt-right groups Trump has courted and bolstered in the US.

Experts also note that this strategy is often marked by a progressive radicalization. To stay in the headlines by stoking outrage, the level of outrage must be constantly turned up. Again, Trump’s presidency provides a pretty good case study.

Ex-AfD member Franziska Schreiber: ‘I was met with hate’

Still, this radicalization carries risks for the AfD. First of all, it’s largely devoid of content — focussing instead on simple messaging aimed at targeted audiences — hardly enabling a culture of rigorous debate.

For Britta Hasselmann, that is the gaping hole in the AfD’s flank. Yet it remains a weakness that other parties can’t seem to exploit: “We must learn to make it clear that the AfD has no content whatsoever and no answers to the big questions facing us down the road: Neither to the coronavirus pandemic, nor climate change, nor social issues. We must learn to expose this lack of vision.”

The other potential danger for the AfD could prove to be law enforcement. Germany’s domestic intelligence agency already classes parts of the party as extreme right-wing and is monitoring their activity. Should the entire party fall under formal observation by domestic security services, that could bring huge practical drawbacks, as well as perhaps scaring away party members and voters. That’s one more reason stunts like last week’s Bundestag disruption are controversial — even inside the AfD.

This article was translated from German.