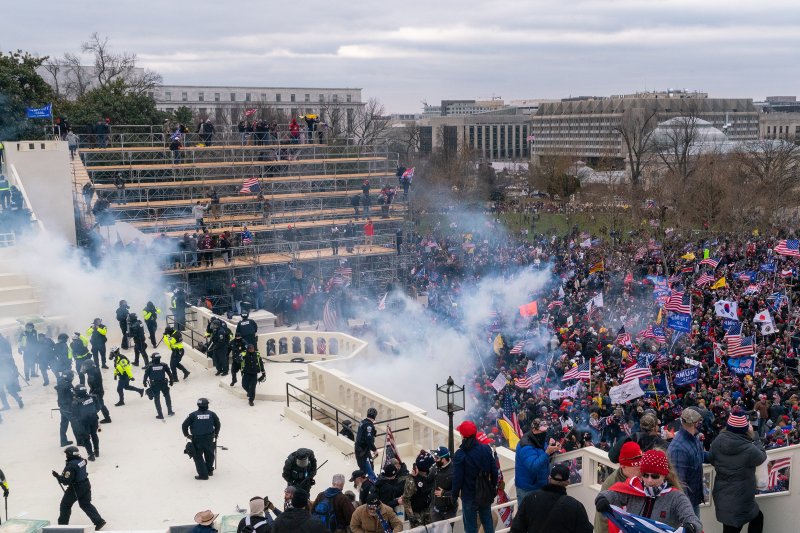 Rioters objecting to the certification of President-elect Joe Biden by Congress were briefly blocked by police outside the Capitol before gaining entry on Jan. 6. They wreaked havoc before being expelled.
Peter van Agtmael—Magnum Photos for TIME
By


One day after the U.S. Capitol building was raided by far-right rioters, the fallout in Washington, D.C. has begun. On Thursday, federal and local authorities publicly traded blame and demanded accountability for how the pro-Trump mob so easily overran police, invaded the U.S. Congress and forced an evacuation, despite weeks of widespread warnings on social media that suggested the protests might turn violent. U.S. Capitol Police Chief Steven Sund resigned, while the House Sergeant at Arms and the Senate Sergeant at Arms were told by Democratic leadership to step down.

But even as Congress’ law enforcement and security officials were held accountable for what they did, or perhaps didn’t do, attention turned to the lack of apparent response from immense federal agencies run by President Trump, like the Department of Homeland Security (DHS) or FBI.

It’s not like these agencies, which after 9/11 were granted sweeping authorities and capabilities to unearth terror plots and suspects, weren’t aware of the threat. On Oct. 6, DHS issued its first-ever “Homeland Threat Assessment” that said far-right extremists pose the largest threat to the U.S. homeland, other than adversarial nation-states. In what now reads like an ominous warning, the 26-page document said that domestic extremists “might target events related to the 2020 Presidential campaigns, the election itself, election results, or the post-election period” and that they “could mobilize quickly to threaten or engage in violence.” It identified open-air events, “such as campaign-associated mass gatherings” as “the most likely flash points for potential violence.”

It was an unusually pointed statement by DHS, which under the Trump Administration has been pressured to downplay the threat posed by rightwing and white supremacist groups, according to former intelligence officials and whistleblowers. DHS and FBI did not return requests for comment, but security analysts say the federal government must prioritize far-right violence among homegrown threats.

According to a 2020 study by the Center for Strategic and International Studies, right-wing extremists perpetrated two-thirds of the U.S. terror attacks and plots in 2019 and more than 90% between Jan. 1 and May 8, 2020. Far right extremists “are taking advantage of the fact that we’re all turning a blind eye to it,” said Elizabeth Neumann, who resigned from leading the DHS office that oversees responses to violent extremism last April. Domestic terrorism is not even a federal crime, forcing prosecutors to charge suspects under other laws, such as hate-crime laws. “A lot could be helped by some clear-cut messaging much as we did after the 9/11 attacks, defining the enemy, defining the threat and saying, ‘We’re not going to stand for this,’” Neumann said.

“The Turner Diaries,” the 1978 race-war novel that has inspired generations of right-wing extremists, features a mortar attack on the Capitol, she said. “So, the events this week are like a fantasy come true,” Neumann said. “We’re likely to see adherents of this ideology use the storming of the Capitol as a rallying cry. We’re in a dangerous moment for the next few weeks leading to, and after, the upcoming Inauguration.”

Ken Rapuano, the assistant secretary of defense for homeland security, told reporters Thursday that the Justice Department and local law enforcement repeatedly told Pentagon brass that there weren’t any indications of “significant violent protests,” before the Capitol was seized. This came despite many instances last year when crowds of pro-Trump demonstrators had overcome police and stormed the Michigan and Idaho statehouses during the summer.

But by Thursday, it appeared the message had been received by D.C. Mayor Muriel Bowser who requested support from the National Guard. The U.S. military mainly supports local authorities through the National Guard, which is under the control of state governors, who respond to requests from local leaders. D.C. does not have a governor, so the Secretary of Defense has that responsibility, which has been delegated to the Army Secretary Ryan McCarthy by statute.

“Yesterday was a horrible and shameful day here in the capital, and the nation at large,” McCarthy told reporters. “The District of Columbia asked the Army for help, and our National Guard responded.”

McCarthy said 6,200 National Guard members from D.C. and six states–Delaware, Virginia, Maryland, New Jersey, New York and Pennsylvania–are converging in the national capital region by this weekend. A 7-foot “non-scalable fence” has been erected around the U.S. Capitol and should remain in place for the next 30 days, he said, which means it will still be up when Joe Biden is sworn in as the 46th President.