George Blake (né Behar; 11 November 1922 – 26 December 2020) was a British spy who worked as a double agent for the Soviet Union. He became a Communist and decided to work for the KGB while a prisoner during the Korean War. Discovered in 1961 and sentenced to 42 years in prison, he escaped from Wormwood Scrubs prison in 1966 and fled to the Soviet Union. He was not one of the Cambridge Five spies, although he associated with Donald Maclean and Kim Philby after reaching the Soviet Union.[1] 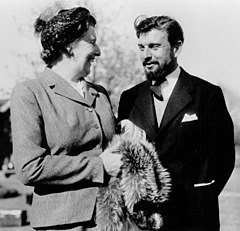 Blake, then family name Behar, was born in Rotterdam in the Netherlands in 1922, the son of a Protestant Dutch mother, and a Sephardi Jewish father who was a naturalised British subject.[2][3] He was named George after King George V of the United Kingdom.[4][5] His father, Albert Behar, served in the British Army during the First World War. While Albert received the Meritorious Service Medal, he embellished his war service when recounting it to his wife and children, and also concealed his Jewish background until his death.[6] The Behars lived a comfortable existence in the Netherlands until Albert’s death in 1936. The thirteen-year-old Behar was sent to live with a wealthy aunt in Egypt,[7] where he continued his education at the English School in Cairo. He later attended Downing College, Cambridge, to read Russian.[8]

While in Cairo, he was close to his cousin Henri Curiel, who was later to become a leader of the Communist Democratic Movement for National Liberation in Egypt. In 1991, Blake said that his encounter with Curiel, who was a decade older and already a Marxist, shaped his views in later life.[9]

When the Second World War broke out, Behar was back in the Netherlands. In 1940, Germany invaded and quickly defeated the Dutch military. Behar was interned but released because he was only 17. He joined the Dutch resistance as a courier. In 1942, he escaped from the Netherlands and travelled to Britain via Belgium, France, Spain, and Gibraltar, reaching London in January 1943. There, he was reunited with his mother and his sisters, who had fled at the start of the war. In 1943, his mother decided to change the family name from Behar to Blake.

After he reached Britain, the now-Blake joined the Royal Navy as a sub-lieutenant before being recruited by the Secret Intelligence Service (MI6) in 1944. For the rest of the war, Blake was employed in the Dutch Section.[10] He intended to marry an MI6 secretary, Iris Peake, but her family prevented the marriage because of Blake’s Jewish background and the relationship ended. In 1946, he was posted to Hamburg and put in charge of the interrogation of German U-boat captains. In 1947, the Navy sent Blake to study languages, including Russian, at Downing College, Cambridge, where his fellow students included the future foreign policy analyst Michael MccGwire.[11][12] He was posted thereafter to the British Legation in Seoul, South Korea, under Vyvyan Holt, arriving on 6 November 1948. Under cover as a vice-consul, Blake’s mission was to gather intelligence on Communist North Korea, Communist China, and the Soviet Far East.[13]

The Korean War broke out on 25 June 1950, and Seoul was quickly captured by the advancing Korean People’s Army of the North. After Britain entered the war on the side of the South, Blake and the other British diplomats were taken prisoner. As the tide of the war turned, Blake and the others were taken north, first to Pyongyang and then to the Yalu River. After seeing the bombing of North Korea, and after reading the works of Karl Marx and others during his three-year detention, he became a communist.[14]

At a secret meeting arranged with his guards, he volunteered to work for the Soviet Union’s spy service, the KGB.[15] In an interview Blake was once asked: “Is there one incident that triggered your decision to effectively change sides?” Blake responded:

“It was the relentless bombing of small Korean villages by enormous American Flying Fortresses. Women and children and old people, because the young men were in the army. We might have been victims ourselves. It made me feel ashamed of belonging to these overpowering, technically superior countries fighting against what seemed to me defenceless people. I felt I was on the wrong side … that it would be better for humanity if the Communist system prevailed, that it would put an end to war.”[9] 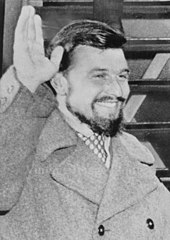 Blake after returning from Korea in 1953

Following his release in 1953, Blake returned to Britain as a hero, landing at RAF Abingdon.[16] In October 1954, he married MI6 secretary Gillian Allan in St Mark’s Church (North Audley Street) in London.[17] In 1955, he was sent by MI6 to work as a case officer in Berlin, where his task was to recruit Soviet officers as double agents. But he also informed his KGB contacts of the details of British and American operations, including Operation Gold, in which a tunnel into East Berlin was used to tap telephone lines used by the Soviet military. Russian capture of the tunnel did not occur until a year later, as a means of protecting Blake.[7] Until Blake’s treachery was discovered, some years later, Operation Gold had been hailed as a resounding success.[citation needed]

In the course of nine years, Blake is said to have betrayed details of some forty MI6 agents to the KGB, destroying most of MI6’s operations in Eastern Europe, although this remains unsubstantiated.[18] Blake later said of this: “I don’t know what I handed over because it was so much.”[19] In 1959 Blake became aware of a Central Intelligence Agency mole inside GRU, and was thus instrumental in exposing P. S. Popov, who was executed in 1960.[20]

In 1961, Blake fell under suspicion after revelations by Polish defector Michael Goleniewski and others. He was arrested when he arrived in London after being summoned from Lebanon, where he had been enrolled at the Middle East Centre for Arabic Studies (MECAS).[21] Three days into his interrogation,[7] Blake denied he was tortured or blackmailed by the North Koreans. Without thinking what he was saying, he stated that he had switched sides voluntarily. He then gave his MI6 interrogators a full confession.[22]

The maximum sentence for any one offence under section 1 of the Official Secrets Act 1911 is 14 years, but his activities were divided into five time periods charged as five offences and, in May 1961 after an in camera trial at the Old Bailey, he was sentenced to the maximum term of 14 years consecutively on each of three counts of spying for a potential enemy and 14 years concurrently on both the two remaining counts – a total of 42 years imprisonment – by the Lord Chief Justice, Lord Parker of Waddington. This sentence was reported by newspapers to represent one year for each of the agents who were killed when he betrayed them, although this is dubious.[18] It was the longest sentence (excluding life terms) ever handed down by a British court, until Nezar Hindawi was sentenced to 45 years for the attempted bombing of an El Al jet.

Five years into his imprisonment in Wormwood Scrubs, Blake escaped with the help of three men he had met in jail: Sean Bourke and two anti-nuclear campaigners, Michael Randle and Pat Pottle. The escape was masterminded by Bourke, who first approached Randle only for financial help with the escape. Randle became more involved and suggested they bring Pottle in on the plan as well, as he had suggested springing Blake to Randle in 1962 when they were both still in prison. Their motives for helping Blake to escape were their belief that the 42-year sentence was “inhuman” and because of a personal liking of Blake.[23]

Bourke had smuggled a walkie-talkie to Blake to communicate with him while in jail. On 22 October 1966, Blake broke a window at the end of the corridor where his cell was located. Then between 6 and 7 pm, while most of the other inmates and guards were at the weekly film showing, Blake climbed through the window, slid down a porch and made his way to the perimeter wall. There, Bourke, who had been released from the jail earlier, threw a rope ladder over the wall. Blake then used it to climb over the wall and they drove off to a safe house. During the escape, Blake fractured his wrist jumping from the perimeter wall, but apart from that it all went according to plan.

After the escape, it became apparent that the safe house was not suitable, as it was a bedsit that was cleaned by the landlady once a week. Blake then spent several days moving between Randle and Pottle’s friends’ houses; after this, Blake and Bourke moved in with Pottle, staying with him while preparing to get out of the country. They smuggled Blake across the English Channel in a camper van,[24] then drove across northern Europe and through West Germany to the Helmstedt–Marienborn border crossing.[7] Having safely crossed the border without incident, Blake met his handlers in East Germany and completed his escape to the Soviet Union.[21]

In November 1966, his wife Gillian, with whom he had three children, began divorce proceedings against him, and in March 1967 Mr Justice Orr granted a decree nisi in Blake’s absence, on the grounds that the conviction of a spouse for treason can amount to cruelty or constructive desertion. Custody of their three sons, Anthony, James, and Patrick, was awarded to Gillian. This caused Blake a good deal of grief, though he knew that Gillian would have struggled to settle into life in the Soviet Union.[25]

In 1990, Blake published an autobiography No Other Choice.[26] The book’s British publisher had paid him about £60,000 before the government intervened to stop him profiting from sales. He later filed a complaint charging the British government with human rights violation for taking nine years to decide on his case, and was awarded £5,000 in compensation by the European Court of Human Rights.[27] In 1991, Blake testified by video recording when Randle and Pottle were put on trial for aiding his escape. They were acquitted.[28] In an interview with NBC News in 1991, Blake said he regretted the deaths of the agents he had betrayed.

Blake later married again in the Soviet Union and had more children. He also reconciled with his other children.[7] In late 2007, Blake was awarded the Order of Friendship on his 85th birthday by Vladimir Putin.[29] Blake’s later book, Transparent Walls (2006), as reported by the daily Vzglyad (“The View”). Sergei Lebedev, the director of the Foreign Intelligence Service (SVR) of the Russian Federation, wrote in the book’s foreword that despite the book being devoted to the past, it is about the present as well. He also wrote that Blake, the 85-year-old colonel of Foreign Intelligence, “still takes an active role in the affairs of the secret service.”

In 2012, he celebrated his 90th birthday, still living in Moscow on a KGB pension. His eyesight was failing and he claimed to be “virtually blind”. He remained a committed Marxist–Leninist. Blake denied being a traitor, insisting that he had never felt British: “To betray, you first have to belong. I never belonged.”[30]

Five years later, Blake remained committed to Russia and to communism.[31] In a November 2017 statement, he claimed that its spies now have “the difficult and critical mission” of saving the world “in a situation when the danger of nuclear war and the resulting self-destruction of humankind again have been put on the agenda by irresponsible politicians. It’s a true battle between good and evil.”[32]