After heavy rain events each fall, the fish have been turning up dead in huge numbers before they spawn, a mysterious phenomenon that has been the

subject of intense research for years

Now, scientists think they have found a key piece to this morbid puzzle — and according to a new study, it’s strewn all over North America’s roadways.

It starts with a chemical antioxidant known as 6PPD, used in tires around the world to make them last longer.

However, as tire treads break down over time and leave behind bits of microplastics on roads, the 6PPD in them reacts with ozone to become a different chemical — a previously unreported byproduct called 6PPD-quinone, scientists say.

This chemical is toxic to coho salmon. Researchers found its presence in roadway runoff samples taken from across the West Coast, leading them to conclude it’s likely the main cause of the population decline. 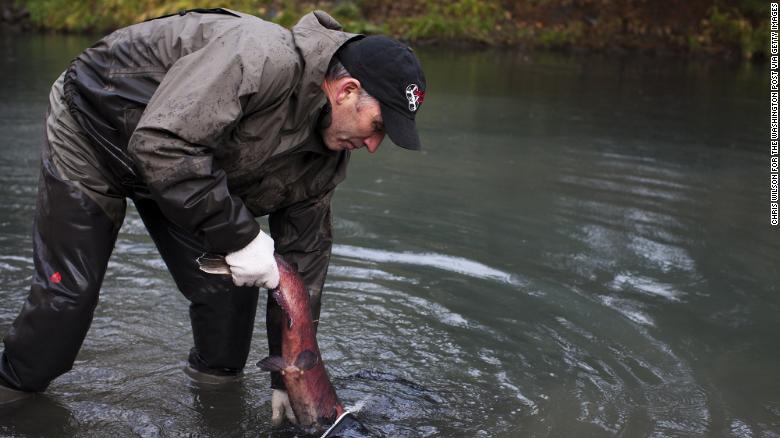 A coho salmon is pulled from the water to be tagged by a habitat manager in Washington state. Scientists have been investigating the mass die-offs of these fish for years.

“We believe that 6PPD-quinone is the primary causal toxicant for these observations of coho salmon mortality in the field,” said Ed Kolodziej, the lead investigator for this study. “It’s exciting to start to understand what is happening because that starts to allow us to manage these problems more effectively.”

Coho salmon return from the Pacific Ocean each fall to spawn in streams and rivers, and can be found from Alaska all the way down into California.

They’re also a critical part of the food chain. The presence of healthy, spawning coho is a good indicator of the overall health of an ecosystem, said Kolodziej, an associate professor of civil and environmental engineering at the University of Washington.

These mysterious deaths have been a clear sign that coho salmon are in serious trouble.

The central California coho population is

, and three other populations are now listed as threatened under the Endangered Species Act by the US Fish and Wildlife Service.

In a healthy stream, Kolodziej said that less than 1% of adult coho typically die before spawning.

But in these mass death events, anywhere from 40% to 90% of the fish can perish in the most affected streams, according to the researchers.

In the mass die-off events that have occurred in streams along the West Coast, anywhere from 40% to 90% of the salmon present have perished.

“We’ve been documenting these mortality events since the early 2000s,” said study co-author Jen McIntyre, an aquatic toxicologist at Washington State University. “We suspect they’ve been going on for much longer than that, but nobody was looking for it.”

McIntyre has been working to solve the mystery behind the coho deaths for decades.

Fish located in waterways closest to high-traffic urban areas have often fared the worst, Kolodziej said, which has led scientists to suspect for years that runoff from roadways was playing a role.

Waterways where these mortality events occurred, the scientists had previously reported, contained a chemical profile that was similar to roadway runoff.

To hone in on the likely culprit, the scientists screened this leachate in the lab to isolate its chemical components, and through a painstaking process of elimination, say they found that 6PPD-quinone was the primary cause of the fish deaths.

Kolodziej credits lead study author Zhenyu Tian, a research scientist at the University of Washington-Tacoma, for playing a key role in making the discovery.

The scientists said more research is needed to understand whether this chemical is toxic to other aquatic species — and even humans — given its prevalence in the environment.

Even with this chemical identified, the scale of the problem could make saving the fish difficult.

Roughly 3.1 billion tires for the planet’s more than 1.4 billion vehicles are produced annually, the study said, and this chemical appears to be used in nearly all of them.

Better treatment and management of runoff before it enters coastal streams is part of the solution, the study authors said, but source control and the development of “green” chemical substitutes for 6PPD in tires is also needed.

In response to the findings, Sarah Amick, the US Tire Manufacturer’s Association vice president of environment, health safety and sustainability, called the study results “preliminary,” but said the industry is committed to working to produce environmentally friendly products.

“The tire manufacturing industry and our member companies design tires for safety and durability purposes. And every element, every material that goes into a tire is focused on the motorist’s ability to drive safely on that tire,” Amick said. “Our industry is deeply committed to sustainability and understanding our products’ impacts not only on the environment and wildlife, but also on human health as well.”