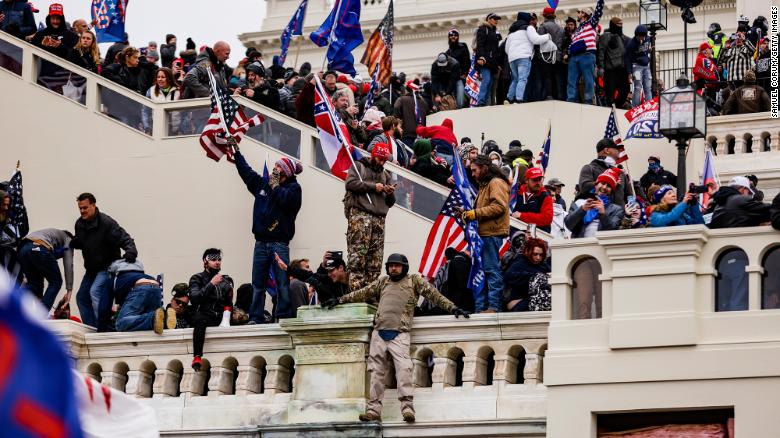 Among the questions federal prosecutors and investigators are pursuing: Was there a plan to capture and hold hostage members of Congress, including House Speaker Nancy Pelosi, whose name was invoked in angry chants by people who stormed a joint session of Congress to try to stop certification of President-elect Joe Biden’s victory over President Donald Trump.

People in military-style gear, some carrying zip-tie restraints, were seen in videos and photos participating in the ransacking of the Capitol, raising the question of whether capturing lawmakers — or even Vice President Mike Pence — was the goal, according to a federal law enforcement official.

Acting US Attorney Michael Sherwin told NPR that “hundreds” of people could be facing charges, from destruction of property to murder, for participating in the insurrection. Sherwin said that

there would be some challenges

because hundreds of suspects were able to leave the scene.

“I don’t want this tyranny of labels saying this was sedition, this was a coup,” Sherwin said.

Before the Trump rally on Wednesday, federal and local law enforcement agencies shared raw intelligence showing that some people associated with extremist groups, including some with White supremacist ideologies, were expected to flock to Washington at Trump’s urging, according to law enforcement officials briefed on the intelligence. One official said the regional level intelligence reports were broadly shared, including with the US Capitol Police. But the officials said, none of the intelligence reports suggested any plots to attack the Capitol. Much of the information was so-called open-source reporting, based on social media and extremist sites on the Internet, where discussions among planned rally-goers shared some of Trump’s false claims about a stolen election.

“It was a lot of noise, like there always is,” said one federal law enforcement official who reviewed intelligence reports from before the Trump rally.

More than 20 arrests on federal charges made since Wednesday have largely focused on some of the relatively easy to identify insurrectionists, many of whom proudly posted on social media or even livestreamed their participation, law enforcement officials said.

The harder work now is to try to build potential domestic terrorism cases against people who helped engineer the attack, one federal law enforcement official said.

In a news conference Friday, a federal prosecutor in Washington told reporters that investigators in some cases are using initial charges to try to arrest people, while they continue to investigate what other possible charges to bring.

That includes looking into possible foreign ties for some suspects; one woman arrested asked for a Russian translator during her court hearing last week.

“The goal here is to really to identify people and get them at least what we call placeholder charges initially and then we look deeper into how these individuals came here, how much planning was involved, and any actors domestic or foreign,” said Ken Kohl, the acting principal assistant US Attorney in Washington.

Amid that effort is an equally urgent one to prepare for more potential violence from groups that are planning to come to Washington before and during the Biden inauguration.

The FBI, the Department of Homeland Security and other agencies are redoubling efforts to try to identify people who could be planning violence.

The fact Wednesday’s mob managed to overwhelm an unprepared Capitol Police force has likely emboldened others who may want to try something similar either in Washington, or in states around the country, officials say. That includes foreign terrorist groups that have always had the US Capitol as a top target.