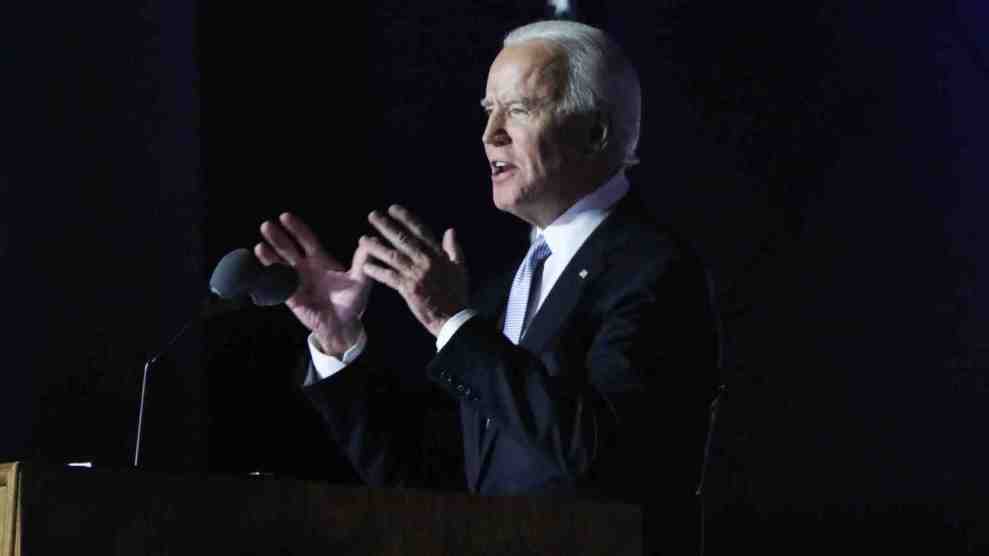 Let our journalists help you make sense of the noise: Subscribe to the

newsletter and get a recap of news that matters.

Don’t bring a knife to a gunfight. That’s essentially the advice dispensed by Sean Connery’s character in The Untouchables in the middle of a violent ruckus. And the 2020 post-election period—in which Donald Trump is waging war against American democracy and a president-elect—has raised what’s become a perennial question: Do Democrats fully understand what they are up against when they do political battle with Republicans? Moreover, is Joe Biden prepared for the partisan rumble that has already begun?

The clash between Ds and Rs has long been asymmetrical warfare, and Trump exacerbated the imbalance. Republicans frequently whine that they are the victims of unfair Democratic shenanigans. But consider recent history. During the 2000 recount in Florida, it was GOP operatives, including dirty trickster Roger Stone, who organized a fake protest (populated not by outraged citizens but by Capitol Hill GOP staffers) to shut down the counting of ballots in Miami-Dade county. In 2004, conservatives and Republicans mounted the phony Swift Boat attack on Democratic presidential nominee John Kerry. (This somewhat successful smear campaign prompted plenty of after-the-fact pondering by Dems on how to respond to false accusations.) In 2008, GOP vice presidential candidate Sarah Palin accused Barack Obama of “palling around with terrorists.” Four years later, Republican presidential nominee Mitt Romney, seeking Trump’s endorsement, embraced the man who was championing the racist birther conspiracy theory.

Meanwhile, through the Obama years, congressional Republicans, led by Senate Majority Mitch McConnell, reached new heights in obstructionism, refusing to work with the Obama White House on a stimulus bill (much needed after the 2008 crash), immigration, and health care reform and threatening a financial crisis over the debt ceiling. And during this time, House Republicans mounted a gazillion Benghazi hearings, abusing their investigative power to tarnish Hillary Clinton, the likely 2016 presidential nominee. Rep. Kevin McCarthy of California, the No. 2 Republican in the House at the time, even said the quiet part out loud: that these hearings were a success because they lowered Clinton’s standing in the polls. As for McConnell, his scorched-earth campaign culminated in the norm-shattering smothering of Merrick Garland’s Supreme Court nomination.

There aren’t comparable actions on the other side of the aisle. Have congressional Democrats ever threatened financial collapse to get their way? Have they denied a Supreme Court appointee a vote? Has any member of a Democratic presidential ticket challenged the patriotism of the Republican candidate (until Hillary Clinton justifiably questioned Trump’s refusal to denounce Russia’s attack on the 2016 election)? And while Democrats have tried to expand voting, Republicans have engaged in all sorts of maneuvers to do the opposite. Overall, the GOP has played a meaner game.

Then came Trump. He aided and abetted Vladimir Putin’s assault on American democracy in 2016. Yet he falsely claimed that election was being rigged against him. As president, he has made more than 22,000 false statements and ruled by resentment. He called for the arrest of his political opponents. He brazenly used the White House as a campaign prop. He demonized his political opponents as a “left-wing” mob that was out to destroy the United States. He encouraged violence and winked at the “very fine people” who advocate white supremacism. He threatened to withhold pandemic assistance to states run by Democratic governors. He accused the media, the Democrats, tech companies, and government officials of plotting against him—and, in recent days, of stealing the election from him. Trump sought to exploit divisions and mobilize hatred. He branded Biden and everyone else arrayed against him as enemies of the nation. (Some of his evangelical supporters have claimed that Trump’s foes are in league with the devil.) And Trump is now striving to undermine the country’s political system by hurling false accusations of fraud regarding the 2020 election results.

No Democratic president or leader has ever engaged in such hate-filled action and rhetoric. No Democratic president or leader has ever cast the other side as a vicious enemy bent on the destruction of the United States. (Hillary Clinton did claim that “half” of Trump’s supporters were “deplorables” because they were “racist, sexist, homophobic, xenophobic, Islamaphobic—you name it.” But she said the other half felt “that the government has let them down” and needed to be understood.) While Trump was leading a red-state crusade of vilification and essentially vowing to wipe out Blue America, Biden asserted he wanted to be president of all Americans and bridge differences. He and Trump were mounting different fights. More Americans responded to Biden, but Trump’s bandwagon of loathing found more than 70 million riders.

And as Trump has stuck with his extreme politics of animus after losing the election, the Republican Party has mostly continued to march in lockstep with him. He has been recklessly alleging that his diabolical enemies are stealing the election from him. Every day, he and his campaign send out multiple emails to millions of his supporters asking for money and declaring that Biden and his evil allies are betraying America by robbing it of its rightful president. Trump is trying to undermine the election and delegitimize the coming-soon Biden presidency. McConnell, Marco Rubio, David Perdue, Kelly Loeffler, and other top Republicans are enabling this by refusing to acknowledge Biden’s victory and by stating that Trump’s pursuit of unfounded legal challenges is justifiable and appropriate. These Republicans are endangering the republic with their actions: They are hobbling a transfer of power during a national emergency, and they are fueling baseless paranoia and distrust among the millions who voted for Trump, which could impede the governance of the nation and render its political discourse even more poisonous.

This is crooked and deceptive conduct for which you cannot find a Democratic corollary. This is not how Democrats play ball. Four years ago, Obama and Biden graciously welcomed Trump and Mike Pence into the White House. (George W. Bush did the same in 2008 with Obama.) They oversaw an effective transition. The Obama White House even left a pandemic playbook behind for Trump and Co.

Trump is, of course, being Trump. He cannot acknowledge he lost. He desperately needs to create an I-was -robbed/stabbed-in-the-back narrative—for his own psyche and for his future plans, be that a 2024 run, a new media outfit, or some other scheme to profit off his millions of supporters. And in response, Biden has played it cool. At a press conference on Tuesday, he downplayed Trump’s long-shot efforts to overturn the election tallies, referring to all this as “not of much consequence.” He added, “It’s an embarrassment.” And he insisted, “We’re going to be moving along.”

Biden didn’t express any outrage or anger. He remained calm. He stayed out of Trump’s fray. No doubt this is a strategic decision: Let Trump have his tantrum but, for the most part, ignore it. Perhaps in this instance, not matching Trump in a rhetorical arms race is the wise choice. Especially given that Trump’s lawyers have so far flopped in courts and Biden’s attorneys remain confident Trump cannot blow up or reverse the election.

But Trump’s dishonest game plan has been adopted by the GOP writ large, and though Trump will presumably be gone come January 20, Biden will have to work with the Rs, particularly if they retain control of the Senate after the two special elections being held in Georgia in early January. During the campaign, Biden repeatedly said he believed he could collaborate with McConnell, his former Senate colleague, and other Republicans on key issues. At the Tuesday press conference, acknowledging that McConnell and other Republicans are refusing to recognize his victory, Biden commented, “the whole Republican Party has been put in a position…of being mildly intimidated by the sitting president.” But he reiterated that once Trump has departed, there will be “enough Republicans…to be able to get things done.” He even said that many Trump voters are “ready to unite, and I think we can pull the country out of this bitter politics.”

These are certainly words of hope. And hope might be the order of the day after a tough electoral battle. But McConnell’s support of Trump’s attack on the election is a troubling sign, especially because it is no aberration. This act of anti-democratic defiance comes after years and decades of GOP foul play and unscrupulous tactics. Obstructionism, demagoguery, deception, mendacity—it didn’t start with Trump. And it won’t vanish when he is gone from the White House and stewing in Mar-a-Lago.

Maybe now is not the time for Biden to call out the heavy artillery. A steady and low-key president-elect who doesn’t focus on his own grievances and concentrates on the job at hand is quite the relief. But after all the ugliness and indecency of the Trump years, and after the Republicans blessing Trump’s assault on the 2020 results, Biden would be smart to factor into his calculations the fundamental reality that the GOP has long relied on underhanded and disingenuous means and ploys. This post-election scuffle may not be a gunfight for Biden. But there is an alarming history of GOP devious brawling. While he calmly proceeds with his presidential transition through Trumpian obstacles, Biden ought to be steeling—and arming—himself for the battle ahead.