FBI #FBI: STOP USING CHILDREN AND TEENAGERS AS THE INFORMANTS AND THE “TRAINEES”, THIS IS THE CHILD ABUSE!
This practice is long standing & UGLY!
You “train” them like predators train their cubs! #FBIChildAbuse #FBISued #FBIMisconduct #ChildInformants https://t.co/MIZ6hdWbdf

Michael Novakhov:
I call for the comprehensive, in-depth, historical, hopefully on the Congressional level, investigation and assessment of the FBI. Americans are fully entitled to know what kind of people are trying to rule their lives and their governments for the past hundred years. I view the FBI, on the basis of my observations for about past 10 years, as the threat to the American Democracy in certain respects. It is very complex, secretive (more than it is needed), and opaque organization. It has many problems and it is deeply dysfunctional, covering it up with the Soviet style heroization and self-glorification in mass media. I think, that the very honest, objective, independent, armed with the sciences and the best experts exploration of these issues will be good for the country and for the FBI workers. It should help to expose the wounds, to study and understand them and their nature, and to resolve the issues and to heal them. This may be the remedy for the FBI’s ills. The opinion was expressed by the observers, that the FBI is too big and unwieldy, difficult to manage effectively, and that it should be broken up into the separate parts, according to their specializations. The special concern is the robust and efficient Counterintelligence Services, closely related to the Counterterrorism issues. Presently they appear to fall through the cracks, largely.
The importance of this subject is obvious, and it is underscored by the recent events.
From what I see and read, the FBI became somewhat better and more professional lately, as strange and paradoxical it may be, during the Trump Administration.
I think that Mr. Wray is a good and efficient leader, and the calls for his dismissal are not justified. But it is more than just the upper leadership, it is the whole organization that is the focus of attention on the part of both the broad public and the lawmakers.
Help the FBI: INVESTIGATE THE INVESTIGATORS!
9:31 AM 5/5/2021 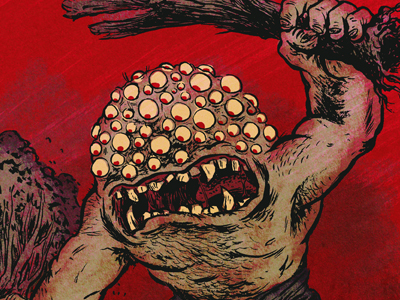 Panoptes from Greek mythology: a giant with a hundred eyes.  This picture also evokes the associations with “taking the log out of your own eye”.

FBI As The Hundred-Eyed And Totally And Legally Blind Monster – By Michael Novakhov – Topic: FBI Surveillance

M.N.: FBI: the United States, the World, and the human behavior and human soul ARE NOT your “Panopticon” – as the objects of your malignant, pernicious, perverse, ineffectual obsession with the mass surveillance! The most amazing thing about the FBI surveillance is that they surveil everything that moves, talks, and whispers, and yet remain utterly blind to what really goes on. Is it not some specific, moles related blindness? – FBI surveillance – Google News Review – 2.25.18

The One Hundred Eyed BLIND MONSTER FBI is the main problem this country is facing. They were subverted and were turned into the blindly destructive Trojan horse for this country. Slowly but steadily and surely, they imploded America from within. Destroy them: erase them from the ground and the social-political practices and the culture of this country. They are the main source of the problems, pervasive stupidity and the deeply rooted evil in America!

The Tip Of An Iceberg: Sexual Misconduct Within The FBI Is Exposed by AP! Investigate The Investigators who are nothing more and nothing less than a bunch of psychopaths, perverts, and child abusers. Abolish the FBI! https://t.co/wFZTzPCmxV pic.twitter.com/QYSliz7k0X