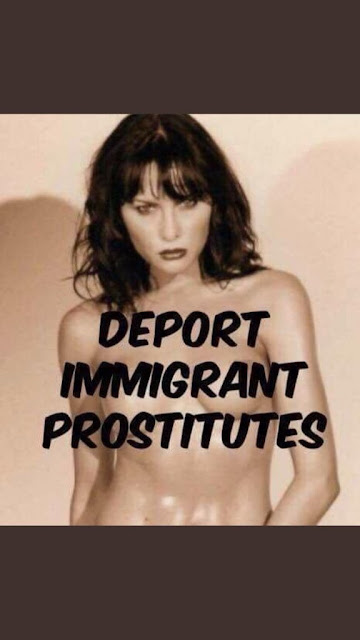 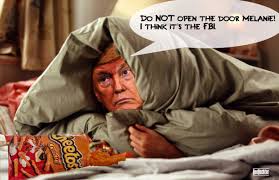 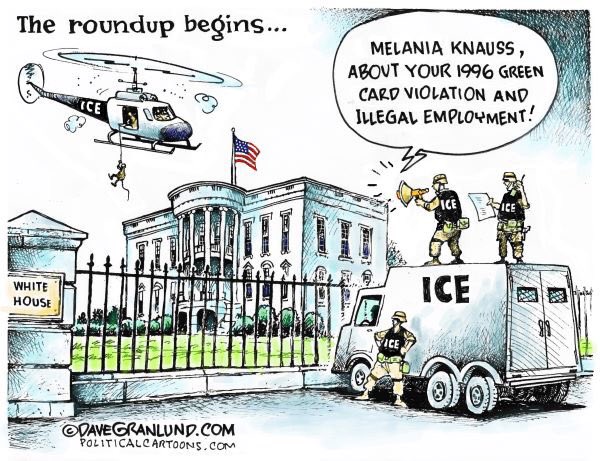 Are we really sure that she and her parents had nothing to do with any of the drug trafficking? They need to go. #sendmelaniaback pic.twitter.com/PSTFAMld0t
Posted by

The Roundup Begins… 6:57 AM 7/22/2019 – Investigate the possible violations of the U.S. Immigration Laws and bring the criminal charges of Sex Trafficking against Donald Trump, Melania Knauss Trump, and Jeffrey Epstein The Pimp For The Rich, who sold Melania to Donald.  For how much? Find it out!  Melania was brought to the U.S. on “The Einstein Visa”, which in fact was “The Epstein Visa”! #SendMelaniaBack! 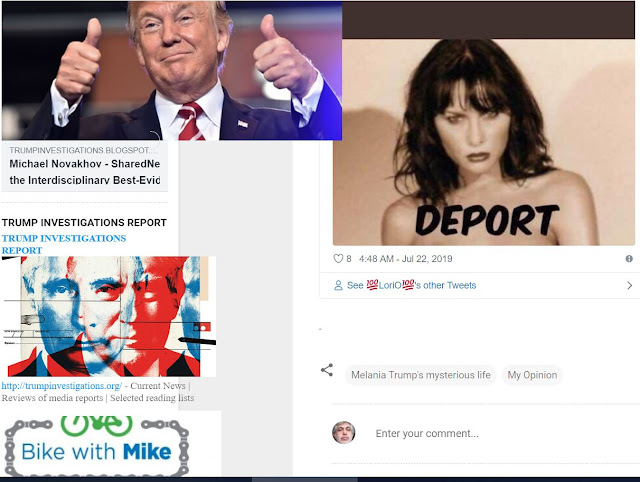 Investigate the possible violations of the U.S. Immigration Laws and bring the criminal charges of Sex Trafficking against Donald Trump, Melania Knauss Trump, and Jeffrey Epstein The Pimp For The Rich, who sold Melania to Donald.

For how much? Find it out!
Melania was brought to the U.S. on “The Einstein Visa”, which in fact was “The Epstein Visa”, on a special and higher level.
For how much? Ah, Donald?
#SendMelaniaBack! #LockMelaniaUp!
How much did you pay for your Melania Delivery? $1M? $10 M? More? You should have given it to charity, you stupid fool!
Did you and your FBI cronies also arrange the investigations and the prosecutions of Epstein after this deal, to secure your hold on your trophy and possession, and to limit their communications?
Who paid for the private investigator of Epstein?
Who arranged the publications in the “Miami Herald”?
Does this story have anything to do with Chris Cline and his death in a helicopter crash just hours before Epstein’s arrival from Paris to Teterboro airport?
Melania and Jeffrey were lovers, after all. He prepped her up for Donald. And Epstein counted on staying in the picture and continuing to manipulate her, for the ultimate benefit of those, whose agent he was, just like he did with the dozens of his other billionaire clients, whom he bugged, taped, and blackmailed also.
It looks like Jeffrey Epstein provided the most comprehensive, broad, and diverse package of services: tax-free investments, entertainment on one of his private Virgin Islands, and the blackmailing services, added for a spicy dash and market value. No wonder, his activities and his VIP clients tethered to him in so many intimate ways, were of the great interest to the various Intelligence Services, as was discussed on the Internet, along with the most intriguing question: “Whose agent Jeffrey Einstein is, actually? Russian? Israeli?”
And I think, that Epstein employer and boss was the New Abwehr-Mob, which is confirmed by Epstein’s very special relationship with the Deutsche Bank, closely resembling its relationship with Donald Trump: practically unlimited credit line in billions of dollars.
Another curious fact supporting the Epstein – New Abwehr-Mob thesis and hypothesis is his particular closeness with Ghislaine Maxwell, daughter of Robert Maxwell, both the very likely New Abwehr agents, posing as the Russian and Israeli agents for their covers, which apparently is quite the common tactic for the New Abwehr.
All this has to be investigated in depth and in details, but the structure and the functions of the Donald-Melania-Jeffrey “Love”-Spying Triangle, appears to be evident.
Sing, Epstein, sing! And sing well…
These are the questions, among many others of the similar kind,  that should be asked of Mr. Mueller.
Donald Trump could not do anything in any project of his, without the FBI participation, overt, but mostly covert.
In fact, Donald Trump might be nothing less and nothing more, and nothing else, but The FBI Tool, used by the unofficial, secret, hidden but powerful FBI leadership to control and to rule this country.
His connections with the FBI have to be investigated very carefully. It is quite possible that many FBI officials, officers, and agents, especially of the corrupt and rotten NYC Branch, were and are on Trump’s payroll.
Naturally, Mr. Mueller would be reluctant to go into these issues, Trump – FBI Collaboration and Complicity, to avoid self-incrimination of the responsibility for the FBI misconduct when he was a Director.
SDNY should investigate Trump and all the related issues aggressively, decisively, and fast.
Michael Novakhov
_______________________________ 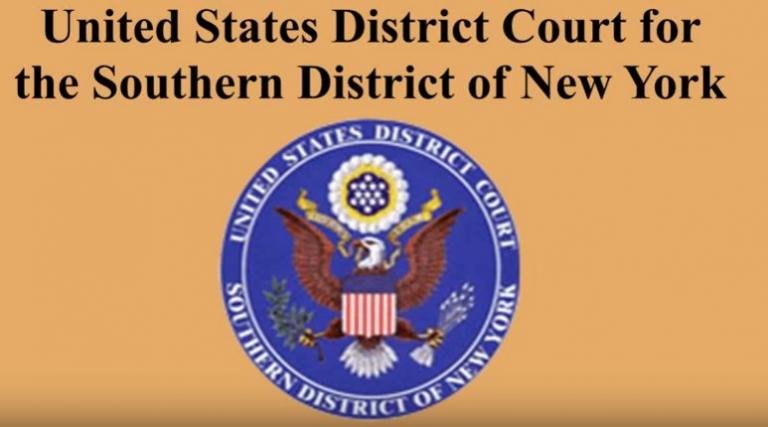 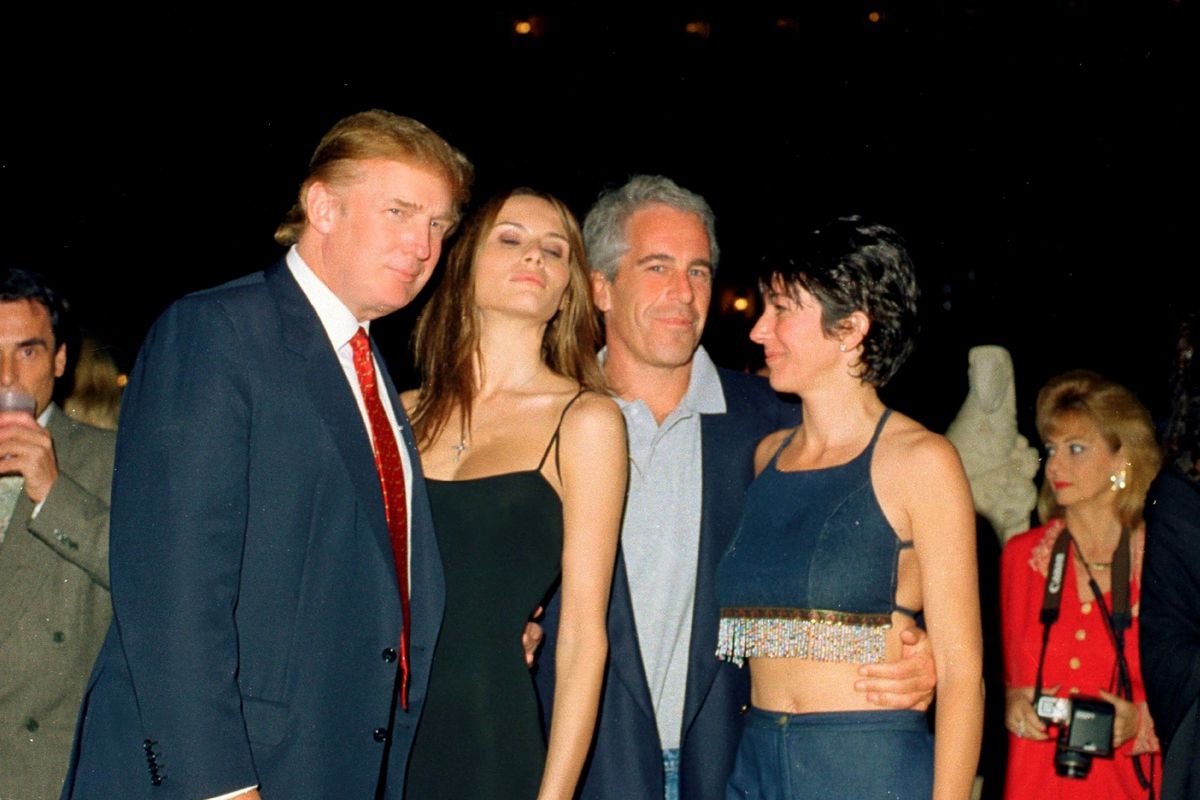