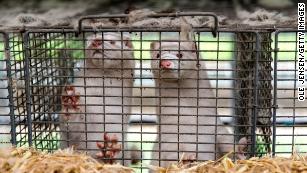 They said it’s “imperative” that the fur trade not become a source of further spread of the virus into the human population, and noted the densely packed conditions on such farms are ripe for amplifying the virus in ways that could help it mutate.

A team in the Netherlands ran whole genome analyses of virus samples taken from animals and people on 16 mink farms in the Netherlands — looking at the full genetic sequence of the virus for clues about where it may have come from, how it spread and whether it was mutating.

“We conclude that the virus was initially introduced from humans and has since evolved, most likely reflecting widespread circulation among mink in the beginning of the infection period several weeks prior to detection,” Bas Oude Munnink of Erasmus Medical Center in Rotterdam and colleagues wrote in their report,

published in the journal Science.

The virus carries a genetic signature that links it to a strain that rapidly spread across Europe and into the United States early in the pandemic. It hit the farms around that time, in April.

People infected the animals, and the animals infected people, they found. And the virus has not yet spread from the farms into the wider community.

So far, no troubling mutations have turned up, they added. Danish authorities have also seen spread on mink farms and seen mutations that don’t necessarily seem harmful, but whose significance is not yet fully understood.

They looked especially deeply at several samples. “In total 18 sequences from mink farm employees or close contacts were generated from seven different farms. In most cases, these human sequences were near-identical to the mink sequences from the same farm,” they wrote.

Fur farms are a cause for worry because of the conditions. “Mink farms have large populations of animals, living at high density, which could promote virus transmission,” the team noted.

Viruses can mutate inside an individual animal or person during an infection, and each time one passes from one to another, there are new chances for change.

But since they cannot say when the virus was first brought to one of the fur farms, the researchers said it’s difficult to track how fast the new coronavirus may have mutated as it passed from human to mink and back again.

One thing is clear, however, the researchers said.

“It is imperative that fur production and trading sector should not become a reservoir for future spillover of SARS-CoV-2 to humans,” the Dutch researchers wrote.

Coronaviruses originate in animals – probably bats, some scientists believe, but with an intermediate mammal likely serving as an incubator to allow the virus to change enough to help it more easily infect people. Cats, dogs, monkeys, hamsters, and rabbits are all vulnerable to infection from coronaviruses and from the new coronavirus.

But efforts to infect pigs and poultry have failed, the researchers note. That may be a piece of good news. Poultry and pigs are a source of influenza spread, and new influenza viruses can mix and mutate when they infect ducks and swine. Dangerous new flu strains often emerge on farms when people interact with these animals.