During the the Trump era, the far-right Proud Boys rode high, enjoying presidential support, recruiting thousands of men, and, as the self-nominated nemesis of leftist Antifa activists, participating in a string of violent street altercations around the country.

But now since Trump’s election loss and the aftermath of the 6 January attack on the Capitol in Washington DC, a series of blows dealt by law enforcement, elected officials and their own leaders have shaken the extremist fraternity that the Southern Poverty Law Center describes as a hate group. 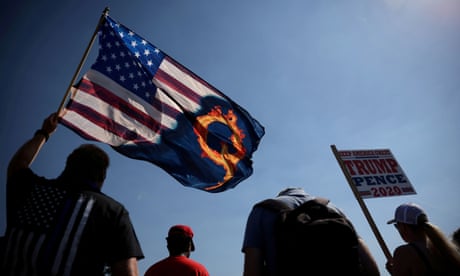 The cumulative impact has experts wondering about the Proud Boys’ long-term future.

But their role in the Capitol insurrection especially has brought far less welcome attention.

Law enforcement agencies have connected at least 10 Capitol arrestees with the Proud Boys in criminal complaints and affadavits. Those charged include leaders like the Florida combat veteran and conspiracy theorist Joe Biggs and Washington state’s Ethan Nordean, whose prominence rose in the group after he was caught on film attacking an antifascist during a 2018 riot in downtown Portland, Oregon.

Biggs – a former employee of Alex Jones’s conspiracy-minded Infowars network – was central in organizing incursions into the city of Portland in 2019 and 2020, each of which drew Fred Perry-clad militants from around the country to confront antifascists and city authorities.

He is now charged with impeding Congress, unauthorized entry to the Capitol, and disorderly conduct.

However, the affidavit supporting the charges also alleges Biggs was involved in extensive radio communications with other Proud Boys on the day. The allegations of coordination between members of the group may hint at more charges to come.

Alex Newhouse, a researcher at the Center on Terrorism, Extremism, and Counterterrorism at the Middlebury Institute, said in a telephone conversation that it was likely that “more conspiracy charges being levied on some of these people in the future”.

Shannon Reid, an assistant professor in criminology at the University of North Carolina, said the strategy in these cases resembles the one prosecutors often use in pursuit of criminal enterprises, where the aim is to “pick up as many people as humanly possible and to hope that they just plead out”.

The cases against Biggs and Nordean turn what had been the Proud Boys’ greatest weapon – social media – against them as authorities have detailed their alleged misdeeds using material that they and others posted online.

For example, a grand jury indictment of a Texan, Nicholas Decarlo, and the founder of the group’s Hawaiian chapter, Nicholas Ochs, alleges that they together inscribed “Murder the media” on the front door of the Capitol before stealing a Capitol police officer’s handcuffs. In an affidavit, an FBI special agent says that they determined that Ochs had been in the building from his own Twitter account.

Meanwhile, Dominic Pezzola and William Pepe allegedly conspired with each other in a sequence of events which included Pezzola assaulting a Capitol police officer, stealing his riot shield, and then using it to smash in one of the Capitol’s windows. The evidence cited in affidavits includes Pezzola’s account on the shuttered conservative-friendly social media service, Parler, and videos posted online by other rioters.

The FBI says that another arrestee, Bryan Betancur, was wearing a Proud Boys cap at the rally. They also say that Betancur is a “self-professed white supremacist” who discussed carrying out school shootings and expressed support for Charlottesville killer, James Fields.

He was placed inside the Capitol building by signals from his court-ordered ankle monitoring device, a parole condition related to an earlier offense.

Newhouse said that voluminous social media evidence suggests that “this was carefully planned and extensively communicated in the moment”. The connection between Proud Boys and other extremist organizations – previously noted on several occasions by US law enforcement – has now led to the first instance of the group being outlawed. Last Wednesday, the Canadian parliament formally declared the Proud Boys a terrorist group, citing their “misogynistic, Islamophobic, antisemitic, anti-immigrant and/or white supremacist” ideology and their association with “white supremacist groups”.

The designation opens the way for any crimes committed by Proud Boys to be prosecuted as terrorist acts. It also means that any fundraising, travel, recruitment and training for the group can be prosecuted, and members can be added to no-fly lists or denied entry to Canada.

Meanwhile, parliamentarians in Australia are pushing their government to follow suit, after McInnes was denied entry to the country on character grounds in 2018.

In the US, while criminal acts can be prosecuted as domestic terrorism, it has not been possible to designate domestic groups as terrorist, and, at least in theory, the first amendment prevents authorities from surveilling domestic groups on the basis of their political beliefs, even if those beliefs encompass an advocacy of violence.

Increasingly over the life of the Trump administration, however, Democratic politicians advocated for just such an approach to rightwing extremists.

Now, the first bill aimed at addressing rightwing extremism as domestic terrorism has been introduced to Congress by the Illinois Democrat Brad Schneider and has attracted bipartisan sponsorship.

In a telephone conversation, Schneider said that while he had first proposed a version of the bill in 2017, before he had become aware of the group, the Proud Boys were “certainly a troubling group, in their rhetoric and their actions”.

“We have seen what they’ve done in various places, whether it was in Washington last year or it with the insurrection in the capital last month,”Schneider added, calling the latter event an attack “not just members of Congress, but the foundation of our government, our constitution, and our republic”.

Other events have compounded the effects of the additional scrutiny. During the Trump presidency, police in cities from California to Kalamazoo were regularly accused of having a soft touch when it came to the Proud Boys and their far-right allies, and these claims have been borne out in nationwide studies. But since the election, local agencies around the country have appeared more ready to respond with force when the group’s street protests become violent.

Police have used batons, gas and other “non-lethal” weapons on Proud Boys in Salem, Oregon, and Washington DC during December and January. Some Proud Boys have remarked on the apparent sea change: in a podcast released on 4 January, Nordean, the Washington state arrestee, said that “the police are starting to become a problem,” even though “we’ve had their back for years”.

On 2 February, those comments were quoted in the criminal complaint detailing Nordean’s alleged participation in the riot.

Just before the riot, Enrique Tarrio, the chair of the Proud Boys, was arrested on charges related to the vandalism of a black church and illegal weapons. Then, last week, it was revealed that he had been a “prolific” police informant.

Since the revelation that he had been a police informant, Proud Boys
chapters in Nevada, Missouri and Alabama have publicly announced their
departure from the main organization on the messaging platform,
Telegram. On the same platform, the also-departed Oklahoma Proud Boys
have exchanged barbs with Tarrio and other leaders.

Tarrio took over leadership of the group after McInnes ostentatiously resigned as a member following Guardian reporting that revealed that federal authorities considered them an extremist group.

Notwithstanding his earlier public disavowals, in 2020 McInnes attended and spoke at the group’s annual WestFest event in Las Vegas in 2020, and has persisted in advocating for the group in the online outlets available to him, including his Telegram and Parler accounts.

Though the Proud Boys may be reeling now, Newhouse warns that opposing a Democratic president gives them a similar opportunity to previous waves of rightwing militancy, like the militia movement in the Clinton years, and its revival as the so-called Patriot Movement during Obama’a time in office.

“I don’t think they’re going anywhere,” he said. “The more extreme fringe actors are going to gain influence,” with some Proud Boys drifting into adjacent extremist groups in the Boogaloo movement or neo-Nazism.

“De-radicalization is one of the hardest problems,”Newhouse said, “harder even than preventing acts of terrorism.”