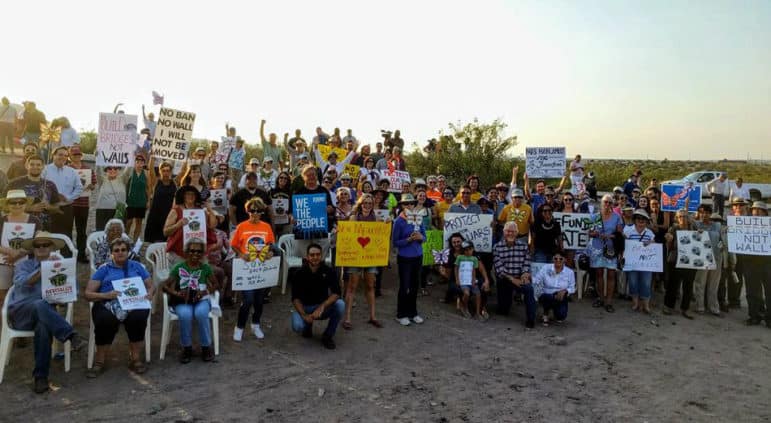 More than 100 people showed up this week at a protest in Sunland Park to denounce existing and planned border walls and the bigger border security agenda emanating from the White House.

For borderlanders like Angelica Rubio, the U.S-Mexico border wall proposed by the Trump administration is a deeply personal affront.

Speaking in the shadows of a U.S. fence undergoing an upgrade that separates Sunland Park, N.M. from the Ciudad Juárez neighborhood of Anapra, as U.S. Border Patrol agents looked on, Rubio, a N.M. state representative, joined more than 100 people this week at a protest denouncing existing and planned border walls and the bigger border security agenda emanating from the White House.

A daughter of Mexican immigrants, Rubio told the crowd of protesters gathered in Sunland Park on a breezy, late summer evening how she grew up worrying about deportations. She criticized Trump administration plans to build a big borderland barrier, hire thousands of new Border Patrol and Immigration and Customs Enforcement agents, and increase immigrant detention.

“This is actually the first time I’ve been this close to the wall,” the Las Cruces lawmaker, a Democrat, said, breaking into tears. “Friends, we’re here tonight because there’s already a wall. We’re here because the wall is a symbol of hate.”

Viviana Arciniega also struck a personal note in her remarks at an event billed as a protest/community town hall. Telling the crowd she was brought to the U.S. by her Mexican parents when she was three years old, Arciniega recalled growing up surrounded by hard-working immigrants who toiled away in the economically important dairy, chile and onion farms of southern New Mexico’s Mesilla Valley, all with the purpose of making a better life for their children.

A beneficiary of the Obama Administration’s embattled Deferred Action for Childhood Arrivals program (DACA), which grants temporary relief from deportation proceedings to certain minors who came to the U.S. without papers and allows them to obtain jobs and pursue educational careers, Ariciniega said she went to work after her father was severely injured in an auto accident.

But the possibility that the Trump administration could cancel DACA has profoundly alarmed the young New Mexican — and many others like her.

“Sadly, DACA is now in danger of being taken away from me and those children who only want a better future,” Arciniega said. “I feel very hopeless at this moment. I’m scared. Honestly, I’m horrified.”

“Take your wall and shove it,” “Defund Hate” and “Nos hablamos por la frontera” (“We speak for the border”) were among the visible messages written on protest signs, some of which were shaped like butterflies.

Billy Garrett, a Doña Ana County commissioner, portrayed an international swath of politically contentious geography as the “land of connections that unite us,” sprinkled with sky islands and carved out by the intersection of four major ecosystems — the Sonoran Desert, the Chihuahuan Desert, the southern Rocky Mountains and the Sierra Madres.

Speaking to the group, Garrett contrasted the initial $1.6 billion border wall funding sought by the Trump administration with basic infrastructure, broadband and affordable housing deficits in Doña Ana County. Here, many underdeveloped rural communities, or colonias, are situated on the periphery of the City of Las Cruces and its twin, modernesque pillars of White Sands Missile Range and New Mexico State University.

“Those billions would be better spent on real needs,” Garrett said. “The cost to bring Doña Ana County up to standard is probably a billion dollars.”

Ackerman said she was arrested protesting the construction of an 18-foot fence at Rio Bosque Wetlands Park adjacent to the river in El Paso’s lower valley in December 2008. A 342-acre nature refuge owned by the City of El Paso and operated by the University of Texas El Paso, Rio Bosque is set amid a continuously growing binational metro area; the habitat is known to host more than 200 bird species plus mammals, reptiles and amphibians. The border fence cut off the wetlands from its mother river, according to the Rio Bosque website.

The Rio Bosque fencing, as well as the fencing that now snakes along a mesa above Sunland Park, was originally authorized by the U.S. Congress in 2006. During the Bush administration and into the Obama administration, nearly 600 miles of barriers were constructed along the Mexican border. Then, as now, immigrant advocates, border residents and environmentalists rallied against the project.

A new report from the intergovernmental International Organization for Migration (IOM) found that more than 1,000 migrants perished near the U.S.-Mexico border between 2014 and 2016. From Jan. 1 to July 31 of this year, 239 additional such deaths were registered, a 17 percent increase over the comparable period for 2016, even though U.S. Border Patrol apprehensions plunged by nearly half during this time, according to the IOM.

Mostly, the deaths have occurred in adverse desert terrain, especially in Arizona and Texas, and in the Rio Grande and connecting canals where deceptive looking waters conceal deadly currents.

According to the IOM:

“In 2017, 57 people have drowned in the border river, a 54 percent increase over the 37 recorded between 1 January and 31 July 2016. This is likely due to the fact that heavy rainfall in recent months has increased the depth and speed of the border river. Nonetheless, migrant deaths in the Río Grande seem to be on the rise in recent years, with 43 such deaths recorded in 2015, and 63 in 2016. However in the case of migration over any body of water, it is difficult to determine the true number of migrant fatalities.

There are few official sources on migrant fatalities on the US-Mexico border, and most of those which are available are only updated on an annual basis. The only sources of information on migrants who have gone missing in the Río Grande are often statements from survivors or family members. The true number of migrant fatalities in 2017 is likely to be higher than the available data indicate.”

In the El Paso sector, five people drowned in the Rio Grande in less than a week during a particularly fatal spell in July. And on Sunday afternoon, A U.S. Border Patrol agent rescued a man from a canal paralleling the river in downtown El Paso — but a second man could not be saved and a body suspected of being of the same individual was later recovered downstream, according to the El Paso Times.

Last February, then-Department of Homeland Security Secretary John Kelly laid out in a memo the rationales and objectives of the new administration’s border wall and security policies. According to Kelly, the strategy is “designed to stem illegal immigration and facilitate the detection, apprehension, detention and removal of aliens who have no lawful basis to enter or remain in the United States.”

In an August visit to Yuma, Arizona, President Donald Trump credited an existing local wall for reducing the number of illegal crossings by 70 percent since its construction was approved in 2006. Trump has also justified his border wall strategy as a necessary tool for curbing the flow of illicit drugs from south of the border.

In many ways, Gabe Vasquez, southern New Mexico outreach coordinator for the New Mexico Wildlife Federation, represents the rainbow of faces in a movement that’s emerged, or reemerged, in opposition to Trump administration border policies.

Another borderlander with roots on both sides of the international line, Vasquez elicited claps at Monday’s demonstration when he pointed out that the City of Sunland Park is seeking to build a border crossing — not a barrier — at the very spot where the protest was unfolding.

He later compared colonias near Las Cruces — where residents struggle with paperwork and lengthy, bureaucratic processes to get arsenic cleaned up from their water supplies — with the willingness of the Trump administration to shell out $25 billion for a “racist monument,” a reference to an estimate of how much it might cost to cover the entire length of the nearly 2,000-mile long U.S.-Mexico border with a wall.

In an interview, Vasquez gave varied reasons for opposing the border wall, including threats posed to animal populations like endangered Mexican pronghorn antelope, which would find it challenging to move back and forth across a blocked border in search of water and food, especially in bouts of drought. Confining species to a restricted habitat likewise jeopardizes genetic diversity, he said.

Vasquez said he supports the federal lawsuit opposing the border wall filed this year by the non-profit Center for Biological Diversity and Arizona Congressman Raul Grijalva — though the New Mexico Wildlife Federation has not directly joined the litigation due to limited resources.

Asked about the diverse attendance at the Sunland Park border fence protest/town hall, Vasquez said Washington’s border policies are stirring a new convergence of forces — or a “green and brown coalition,” as he put it.

“The border is this kind of place for the synthesis of ideas. It’s about our culture, tradition and wildlife,” the Las Cruces-based activist said. “You have Texas and New Mexico getting together. You have immigration advocates and environmentalists coming together — I should say conservationists, because I consider myself a conservationist. It’s conserving our land, our culture and our way of life.”

The border wall and the Beltway

In a July vote of 235-192, the U.S. House of Representatives approved a $827 billion national security spending package for next year that included $1.6 billion for the border wall.

According to a story published at thehill.com, border wall funding was slipped into the larger spending bill by a “procedural maneuver” of the Republican leadership that avoided an “up and down vote on it.” The Senate, where opposition to an expanded border wall is much stronger than in the House, now has until Sept. 30 act on the spending package.

Accordingly, organizers of the Sunland Park event asked attendees to sign postcards against Trump administration border policies that will be sent to members of the New Mexico congressional delegation.

As for President Trump’s recent statement about shutting down the federal government after Sept. 30 if Congress does not fund the border wall, a dispatch from the Reuters news agency observed that the threat “was a politically dangerous one before Hurricane Harvey tore through southern Texas over the weekend and it now looks even riskier.”

In response to reports that the Trump administration might be willing to trade preservation of the DACA program for the border wall, Vasquez flatly rejected such potential political horse trading. “Those kind of negotiations are toxic,” he said.